We live in a culture that does not really appreciate history and the people who came before us. We look back at them as primitive, savages and unenlightened people who did not know as much as “we” do today. We use phrases like “it’s 2020”, “you’re stuck in the past”, “are you really going to let a book that’s 2000 years old shape your life?”, etc. Even in our consumerist habits, we’re geared towards wanting what’s new, the new iPhone, the new PS5, the new car, the new trainers, etc. Our desire for new things is endless even when the old and present is perfectly functioning and more than capable of doing its job. It’s a symptom of the wider culture around us but this way of thinking has made major inroads into the life of the church. It may not take the same shape as it does in the world but many Christians in churches today neglect the Christian voices of the past in search of that “new” and “fresh” revelation.

What hath Athanasius to do with how I think about the incarnation of Christ? Or Augustine to do with my view on the interaction between the Christian life and the public sphere? What hath Thomas Aquinas to say about faith and reason? Or Martin Luther on Justification by Faith Alone in Christ Alone? What hath John Calvin to do with my view of Divine Providence? Or Benjamin Keach on how to use creative writing to communicate the Gospel message? Or … I think you get the drift. Why should Christians today pay more attention to the voices of the saints who came before them?

Firstly, the Christian faith is not one of innovation, but it is a faith that is passed down from generation to generation. The reason why we are Christians today is because twelve disciples took the Gospel of Jesus Christ which they heard first from our Lord and Saviour himself and proclaimed it to the nations. In 2 Timothy 1:5, we see Paul commending the sincere faith of Timothy first found in his grandmother Lois and mother Eunice. In Titus 1:5 we see Paul instructing Titus to elect elders in the churches of Crete to shepherd and teach the flock sound doctrine. Also, in Acts 18:27-28, we see Apollos powerfully declaring that Jesus was the Christ. In all these examples, we see the good news being passed from one person to another. The person who shared the gospel which you came to believe is the last link of a long chain of witnesses of the gospel message. You are not the first Christian and you will not be the last.

Christ has been building His Church

Secondly, Jesus Christ declared in Matthew 16:18, “… I will build my church, and the gates of Hades will not overcome it.” Also, he said in John 14:16, “… I will ask the Father and he will give you another Helper, to be with you forever,”. This means for the past 2000 years the Spirit has been with the church, guiding her by illuminating the Scriptures in the hearts and minds of believers. From the Roman Persecutions of the Early Church right through to the persecutions faced by Christians around the world today, Christ has been building his church and the gates of Hades have not prevailed.  The church that was birthed in the New Testament didn’t skip over nearly 2000 years of history and land in the 21st Century. No, Christ has had witnesses in every generation.

A hedge against heresy

At times when it looked like the church would be overrun with error the Spirit of God used fallible Christians like you and I, to articulate the truths of the Scriptures once again in the face of heresy. You have men like Athanasius who championed the deity of Christ when men sought to relegate Christ to an exalted creature, or Augustine who emphatically declared the necessity of the grace of God to respond to the gospel in opposition to the view fallen people were able to respond to the gospel unaided by divine grace. Or Martin Luther who helped restore the doctrine of Justification by grace alone through faith alone in Christ alone as opposed to Rome’s view of justification by faith and meritorious works.

As faithful believers who affirm the doctrine of Sola Scriptura (Scripture alone), we confess the Holy Scriptures to be the only sufficient, certain and infallible rule of all saving, knowledge, faith and obedience. Therefore, acknowledging the fallibility of men, we are to weigh the opinions of Christian writers of the past (and our own) under the supreme judge that we are to determine matters of truth by, the Holy Scriptures. Here is an example of that in practice from the 16th Century French Reformed Church having already affirmed the doctrine of Sola Scriptura in Article V:

“These Holy Scriptures teach us that in this one sole and simple divine essence, whom we have confessed [God], there are three persons: The Father, the Son, and the Holy Spirit. The Father, first cause, principle, and origin of all things. The Son, his Word and eternal wisdom. The Holy Spirit, his virtue, power, and efficacy. The Son is begotten from eternity by the Father. The Holy Spirit proceeding eternally from them both; the three persons not confused, but distinct, and yet not separate, but of the same essence, equal in eternity and power. And in this, we confess that which hath been established by the ancient councils, and we detest all sects and heresies which were rejected by the holy doctors, such as St. Hilary, St. Athanasius, St. Ambrose, and St. Cyril.”

As the Preacher of Ecclesiastes says, “there is nothing new under the sun”. A lot of the false teaching we see today are old heresies dressed up in new garbs. Some of these teachings have been dealt with by the church in the past and we will do well to gain from their insights and wisdom.

The church has always affirmed the truths of the Scriptures in creeds, confessions and catechisms. However, every generation has been faced with how to engage the world around them with the unchanging message of the Gospel. Three powerful 17th-century examples are John Bunyan, Benjamin Keach and Henry Jessey. These pastors were not shy to use creative literature to faithfully communicate the unchanging Gospel to their audience. John Bunyan is well known for his allegorical novel called “Pilgrim’s Progress”, which possibly sold 100,000 copies in its first 15 years. Benjamin Keach also authored an allegorical novel called “The Travels of True Godliness” which taught about the Christian Journey. Henry Jessey wrote “A Catechism for Babes or Little Ones”. He saw the need for the Gospel to be communicated in the simplest of ways for the youngest of listeners. God used men who were faithful in their message yet presented it in a unique way for the edification of their listeners. Who knew Christian creatives could learn a thing or two from church history?

Much more can be said about why we should pay more attention to the Christian voices of the past. Whilst we can learn from their victories, we can also be humbled as we read of their flaws. Thank God we are part of a body made up of believers scattered throughout history; we are truly “surrounded by such a great cloud of witnesses”. May we be those who acknowledge his glorious work throughout the history of his church and may we powerfully proclaim the truth of his word for the benefit of those around us, for generations of Christians to come whilst standing on the shoulders of the giants who came before us, to the glory of our God. Amen. How To Trust God in Times of Hardship 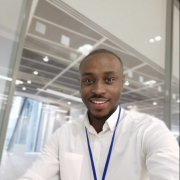 Nathan Nwanji
Nathan is a member of Kings Church London. He and his wife, Sadequea, live in London with their son.