A couple of weeks ago I had the pleasure of hosting Lord Michael Hastings during our ‘Gospel in a Broken World’ online conference. We spoke about humility and he gave a lot of anecdotes and examples which got me thinking- with all that we’ve seen recently in regard to attitudes towards social justice, how could more humility play a role in these discussions?

The Epitome of Humility

It’s worth noting humility is one of the abstract terms used a lot in Christianity. It’s always a good thing, we always should have more, but it’s hard to do 24/7 and by the world’s moral standard, it isn’t even all that necessary. As a result, being humble is something that can be elusive at times. Without even realising it we can let pride sneak in and become the more dominant force. Speaking from experience there are times where I have accomplished things out of pride and a sense of competitiveness, but it has been difficult to switch this off when pride became the driving force. The issue with pride is that it is addictive and self-fulfilling. The more you inflate your sense of self, the more likely you are to act in an effort to protect that sense of self.

God opposes the proud and shows favour to the humble.

Jesus was the epitome of humility and He set the standard. He was the most capable man to have ever walked the Earth, a man with access to omniscience, omnipresence and omnipotence, He should never have had to prove Himself or listen to the lowly opinions of those around Him. Were the disciples going to teach the Son of an all-knowing God anything useful? However, as easy as it would have been to dismiss the Pharisees who didn’t know what they were doing, or to grow frustrated with the disciples and leave them behind for still not believing after He had shown them more than enough, Jesus always remained patient and humble. He went so far as to wash their feet just to make this abundantly clear. Jesus could have acknowledged that He had access to more power than anybody in the history of mankind and lauded it over anyone that challenged Him, but instead, He took on the mantle of teacher, patient with His students and pursued a goal of enlightenment.

A Standard Set By Christ

Then Jesus was led up by the Spirit into the wilderness to be tempted by the devil. After he had fasted forty days and forty nights, he was hungry. Then the tempter approached him and said, “If you are the Son of God, tell these stones to become bread.” He answered, “It is written: Man must not live on bread alone but on every word that comes from the mouth of God.” Then the devil took him to the holy city, had him stand on the pinnacle of the temple, and said to him, “If you are the Son of God, throw yourself down. For it is written: He will give His angels orders concerning you, and they will support you with their hands so that you will not strike your foot against a stone.” Jesus told him, “It is also written: Do not test the Lord your God.” Again, the devil took him to a very high mountain and showed him all the kingdoms of the world and their splendour. And he said to him, “I will give you all these things if you will fall down and worship me.”

A great example of Jesus rising above the temptations of pride and embracing humility was during His fast in the wilderness for 40 days and 40 nights. When Satan came to tempt Him, you see that it was a play on His pride. What else do you use to tempt a man who is clearly not beholden to bodily desires? This is worth noting for us because sometimes we feel as though because we are not committing any clear sinful deeds, that we are protected from sin but as we saw with Jesus, Satan began each new temptation with an attack on Jesus’ pride, by stating these words, “If you are the Son of God”. It reminds me of school days when someone would instigate a hostile situation by saying ‘oooooh if it were me, I wouldn’t have done that’. This is what Satan is saying to us to draw a response that says ‘If you don’t do this now, you are somehow less’ and this lie is incredibly dangerous. The truth is that refraining from such prideful temptations is the more impressive feat and the standard we as Christians should be aiming for. Even when, in a desperate final attempt, Jesus was promised the world, He was humble enough to put Gods plans and objectives above His own.

Current events in the world are showing a need for humility now more than ever. While it’s not an easy task, it is the standard set by Christ. At this time, around the world, conversations are taking place that require introspection, unlearning, critiquing your own long-standing opinions, whether in regards to racism, rape culture, human rights and so much more. There is a need for humility to acknowledge that what you thought previously might be wrong, misinformed or unfair. Without this, we cannot grow and these conversations become nothing but debate for sport or shouting matches between the loudest in the room. If you cannot recognise that man cannot live off ‘his own experiences’ in the same way he cannot live off bread alone, you end up with a very lopsided and inconsiderate view of others because you haven’t experienced their lives. We all have blind-spots and areas in which we do not understand the complexities of living and it requires humility to acknowledge these blind spots and want to address them.

For Christians, a key theme of our relationship with Christ is the movement from darkness to light, from chaos to peace, from confusion to understanding. In this way, empathy and understanding for people who do not yet understand the complexities of an issue should be second nature to us. We should be eager to rush into opportunities that help people grow and have a chance at redemption, not to make us feel smarter but from a desire to help. While I understand it is not humane to ask the oppressed to have patience with their oppressors, if ultimately education and addressing a disconnect in understanding is the goal, it will require the humility to sit with your oppressor and impart knowledge as Jesus did with a world that rejected and lynched Him. I don’t think I could call the entire world to sit with people who have systematically oppressed them but I do think I can make the call to Christians, as we are assisted by grace and Christ has given us the role of advocacy and mediation.

When Jesus had washed their feet and put on his outer clothing, He reclined again and said to them, “Do you know what I have done for you? You call me Teacher and Lord- and you are speaking rightly since that is what I am. So if I, your Lord and Teacher, have washed your feet, you also ought to wash one another’s feet. For I have given you an example, that you should do as I have done for you. Truly I tell, a servant is not greater than his master, and a messenger is not greater than the one who sent him. If you know these things, you are blessed if you do them.

We are all now His sent messengers in a world that will not always love us or receive our message. We are sent to be an example of humility, washing the feet of those around us. Not only this, but we were sent by the epitome of love and patience and as He says in John 13:16, “no messenger is greater than the one who sent him.” None of us are above reproach and are above being wrong, none of us have seen from all points of view and none of us are above engaging the with the curious and those looking to grow. Therefore we should look to Jesus, following His footsteps and example of humility, being lights that shine in the darkness of this broken world that seeks self before others. 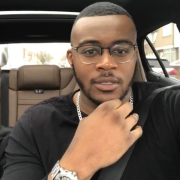 JJ Irukwu
JJ is a graduate in Politics, Philosophy and Economics from the University of Manchester. He is a marketing manager at an international media orgnanisation, also doing freelance marketing work. JJ is passionate about communication as seen in both his professional role and his role at OGGM sat as part of the editorial team. JJ is a contributor to weekly articles but also sits as one of the trustees tasked with overseeing the general governance of OGGM