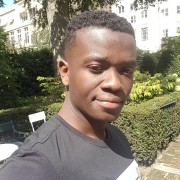 Samuel Cole
"What is done for Christ will never fade away." These words gave Samuel the conviction to join OGGM - being part of a revolutionary work that would change generations forever. As Head of Finance and Head of Missions for OGGM, Samuel is focussed on ensuring the financial resources of OGGM are put to best use and that the gospel message is heard, understood and treasured by as many people as possible. Samuel is also a poet and has received many accolades since starting his public performances in 2014. In 2016 he was awarded the Outspoken LDN ‘Best Poetry in Film’ Prize for his poem ‘Heart Cry‘. In 2018 Samuel was a finalist in the Poets in Autumn Poetry Challenge Competition and performed as part of the Poets in Autumn World Tour in London. Twitter/IG/Facebook/Twitter/YouTube/SoundCloud: OnlySamuelCole Three Ways To Think About The Gospel And Racism The Opposite of Faith is not Doubt Late in the midnight hour, God’s going to turn it around

Why Every Christian Should Desire To Be Unimpressive

Can I speak things into existence?