I recently attended an event and they sang Atmosphere shift by jubilee worship and it really touched me and ministered to me. It really got me thinking and I really believe that there’s a hidden message that God wants to tell his people through that song. God wants to call his people back to him , He saying this is not the time for you to move without me. God has called us to be walking atmospheres of God and there are too many people walking in the name of God and not in the Spirit of God.

“And so it was, whenever the spirit from God was upon Saul, that David would take a harp and play it with his hand. Then Saul would become refreshed and well, and the distressing spirit would depart from him.”

David played the harp for Saul because he lacked the atmosphere of God as he decided to walk in his own accord which as a result cost him the presence of God . And God sent that evil spirit to torment Saul as a reminder that He was no longer with him. And used David as an example because now the hand of God , (the Holy Spirit) was upon David (sauls replacement) .

“indeed it came to pass, when the trumpeters and singers were as one, to make one sound to be heard in praising and thanking the LORD, and when they lifted up their voice with the trumpets and cymbals and instruments of music, and praised the LORD, saying: “For He is good, For His mercy endures forever,” that the house, the house of the LORD, was filled with a cloud,”
‭‭

There are two similarities which are revealed in the two verses mentioned above. Music and Unity . This goes to show if you want to be walking in the atmosphere of God and really to be one with the Holy Spirit, these two features are very important.The former reveals why you actually need to be careful with what you listen to because these two verses highlights the pound that sound and music resonates with God. We are living in a time where people do not want to hear the truth. The truth of the matter is we cannot give our ears to everything. Because what you listen to either increases the atmosphere of God or decreases the atmosphere of God. That goes for the music that we listen to and the people who we allow to speak into our lives. The devil knows that the quickest way to your mind is through your ears.

“For as we have many members in one body, but all the members do not have the same function, so we, being many, are one body in Christ, and individually members of one another.”

Another tactic that Satan uses to stop the atmosphere of God manifesting is disunity . He knows that we are greater in number and so he is trying his best to bring division not even in our churches but in the body of Christ in general. The churches are shouting revival. But yet it looks like the community surrounding them is getting worse rather than better. What is going on ? God has been revealing that there’s a Spirit of individualism that has taken over the churches that has made us think we do not need each other. That is a lie from the pit of hell. We serve a God that is a strategic God. Just as he places different parts of our organs in certain places in our body as He knows it will function more effectively there is the same way he has established different churches different dominations that will serve its function all around the world. Just because we have different functions in the body of Christ it does not mean that one function is less important then the other. We need each other more than ever in these dark times . We are stronger in numbers .

The world needs to come to a place where society cannot live without the body of Christ. God has anointed people is specific areas in society and He is waiting for them to rise. What church culture has taught us is that the anointing starts and ends in a church building. But God said go into all nations not go in to all churches. (Matthew 28:18-20). Thinking that the anointing is only for Sunday morning is doing a disservice to Gods kingdom. God wants his anointing and his atmosphere to follow you wherever you go. The world is waiting for anointed politicians , lawyers , nurses , psychologists , bankers to rise up it needs to get to place where these companies can not function because they are missing that specific anointing .

People of God, looking at we are living in, this is not the time to remain silent. This is not the time to be backed up in one corner.
“Every place that the sole of your foot will tread upon I have given you, as I said to Moses.”Joshua‬ ‭1:3‬ ‭NKJV‬‬
Just Know that where you are standing God has given you the authority to be there . You are not in that field by accident you are not in that Job by accident , your not in your community by accident. Nothing just happens.

We are living in a time of complete confusion , people are just getting tossed back and forth . Just look at the confusion surrounding Brexit, are leaving or our we staying? What is going on in the Spiritual realm is manifesting in the earthly realm . This verse Satan is called the prince of their air. So this goes to show that the environments that we find ourselves in earth is working overtime to destroy us. But the good news it that the force that fighting for us is GREATER than the force fighting against us. Greater is he that is in us than he that is in the world (John 4:4). The devil will try lie to us and make us feel like we don’t have power just because of the circumstances we are under or maybe the environment we have grown up in. God did not create you to be a product of your environment . In other words God did not create you to be a product of Satan. He has given us the power and authority. That’s why the enemy will do his best to keep you silent because he knows death and life is the power of the tongue. As you speak life into your situation you are speaking death into the camp of the enemy . Never let the circumstances in life silence you but let it be an indication that you have work to do on earth . You have something to shift in the community that you are in.

How long do I have to wait? 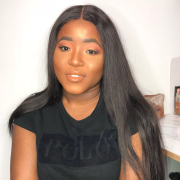 Sandra Yagien
Sandra is a Graduate in BA sociology and criminology, she is also the founder of the blog site jesusisthereforiam. Sandra would describe herself Hardworking , caring and most of importantly a Lover of Christ. The Gospel for Sandra Simply means the good news of Jesus Christ. She believes that epoch that we are living so many people have received bad news , been in bad situations and as a result this has hindered people from receiving the true revelation of Jesus Christ. This is why Sandra has made it her mission to Spread the gospel weather it be through singing , videos clips or through her Blog posts. She has joined OGGM as she believes that the gospel needs to reach a wider audience, she hopes through contributing to this Platform the readers will be encouraged and begin to understand their function in the body of Christ.

Can We Find Hope in Our Grief? Where Does Your Hope Rest?

How Should Christians Respond to Racial Injustice

Praying Through The Darkness